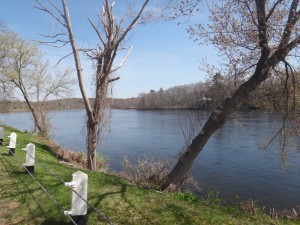 Gorgeous ride with the North Shore Cyclists along the Merrimack river.  It is still a little cool but in the bight sun it was hardly noticeable.  I fell in with a pace group and enjoyed a great ride along fairly flat road and amazing scenery.  Eventually the field thinned out and we all separated.  I ended up at the parking lot by myself with only a few other cyclists left to come in.  I think I was one of only a few that took the longest route of the day, most taking the 21 or 38 mile loops.

If you are interested then you can see all the details on the routes and download cue sheets here.