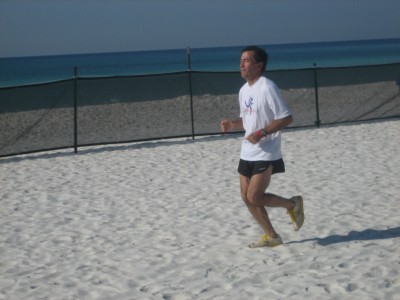 The class started promptly on time and Danny Dreyer introduced himself to all of us.  I was sort of expecting an introspective, centered and focused guru type.  I have no idea why I expected that except that idea seemed to be a natural fit with the concepts behind Chi Running.  I am not saying Danny isn’t any of those things, but what jumped out at me was that he was a real likable and relaxed guy.  Within a few minutes he had us laughing, relaxing and settling in for the day.  He brought 5 (mostly local) Chi Running instructors, all of which seemed to have an impressive running pedigree in their own right.  One competes in iron man triathelons, another run 1:15 half marathons and yet another is running his first ultra-marathon at the age of 60.  All of them very enthusiastic about Chi Running and committed to its concepts and benefits.

Danny asked how many attending were actively trying to use Chi Running already and it turned out it was the entire group.  I guess in some cases there are people who attend who are looking to learn about it fresh from the start.  He talk about the various theories behind Chi running and why it makes such a big difference in injury prevention.  He said that the goal for all of us today would be to walk away from the training with a good body sense as to what it feels like when you are doing it right so we can properly practice and improve once we get home.

He broke us up into groups and assigned one coach to each group of 10-11 runners.  He put all the beginner runners in one group and everyone else spread out into different groups randomly.  We then spent some time with our couch, each of us introducing ourselves with a brief running history and a list of running injuries we were currently has previously suffered from.  My group all were in the 20+ miles a week running category and all were over 40.  The list of injuries read like a laundry list of what can go wrong with a runner.  Heal, ankle, foot, calf, tendon, IT band and hamstring issues were all well represented. Throughout the day our coach was with us, offering observations and guidance through all our drills.

Next Danny had us spread out around the entire room, along the walls.  We spent the next hour trying to establish some body sense for each of the focuses that when combined make up Chi Running.   He would first talk about it, then demonstrate it to us and then ask use to practice it.  The coaches moved throughout the room making corrections.  I am writing about these focuses separately here:

Danny led us through a series of drills to get the hang of each of these focuses.  Often he would supply a visualization that we could use to aid our practice.  In fact he calls Chi Running a “mindfulness practice”, a term I had heard used applied to meditation and yoga.  After a couple of hours we went up to the inside track and put all the pieces together in group runs around the track.  The coaches ran next to us pointing out posture issues, foot placement problems and other and sundry mistakes we were all making.  One coach came up next to me and pointed out my leg was bent far too much and I needed to straighten it and “run tall”.  (BTW it has been about a week and I can say I finally have this figured out).  Danny crouched down on the track watching feet placements and direction and then gave us all some group adjustments before we did some more laps. 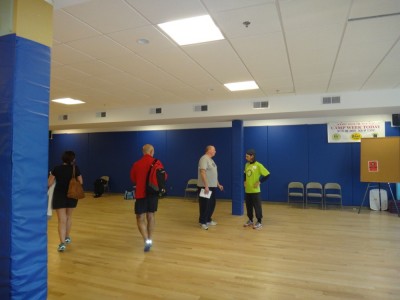 At lunch everyone brought their lunch back into the main room and sat in a circle around Danny.  He went around the room asking for people to volunteer one of their shoes, which he then piled in front of him on the floor.  He spent the lunch hour talking about shoe design, addressing stability, heal-toe drop, padding, toe-box size, fit, etc.  He talked about trail running shoes and road shoes and racing flats.  He spent time on minimalist shoes (and barefoot) as well as bigger, more structured shoes.  Pretty much every shoe on the market was represented in the pile and it was fascinating to see him pick up each shoe and diagnose it.  There was not a single “perfect” shoe.  There were always compromises of some kind.  My Saucony Kinvara 3’s he criticized for their pointed toe and cramped toe box, but liked their weight and low heal-toe drop.  He himself wore Sketcher Go Bionics which I had never heard of before.  It was a very laid back, informal and useful conversation.  A lot of people had questions not only about their shoes but orthotics, pronation and stability control.

After lunch we all went up to a big gym and took off our shoes and socks to practice our full-foot strike under our center of mass.  Once again, the one legged posture stance is what is supplying support, which includes a balanced full foot on the ground.  Danny demonstrated how different his feet sounded as he ran in different ways.  If he ran with his feet landing in front of his center of gravity the sound was a deeper, heaver impact.  He would switch back and forth so we could see the difference as well as hear the difference.  He then had us line up in our groups and then run to the other end of the gym and back.  He had us run “normally” away and Chi Run on the way back.  As an observer it was crazy to hear the difference… it was like a herd of water buffalos out and fairly quiet on the way back.  We alternated trying different things and running back and forth while he kept up a running commentary on what he was seeing.