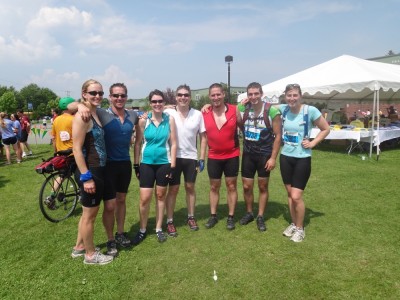 My first century cycle ride completed! I met with my cycling team up in New Hampshire at dawn to line up for The Prouty, an annual ride through the Connecticut River valley to raise money for the Norris Cancer Center.  Our team, dubbed “The Proud Prouty Peeps”, had trained over the summer together to prepare for the big event.  The morning was hot and the day was hotter, topping out at 92 degrees as the day progressed.

Our teamed stayed together the entire day, starting together and finishing together.  Already the memory of the day is lost behind a haze of exhaustion, but I think the feeling of accomplishment is what I will really hold on to.  It was particularly great to ride with my sister Shelby and her husband David.

We had some mechanical issue along the way.  One of our bikes popped a spoke, which honestly was a first for me.  We had lots of experience with flats, but this was a bit different.  A bike mechanic at the next stop fixed us up and trued the wheel and we were on our way.  We saw lots of mechanical issues with other teams as the day wore on and some looked to be unrepairable during the event.

The ride was very well organized, with water and food every 10 miles as well as bike mechanics and medical support.  The roads were very well marked and the police were a presence for traffic control for those places where they were needed.  The entire event raised over $4 million for cancer research and raised awareness for the entire area. 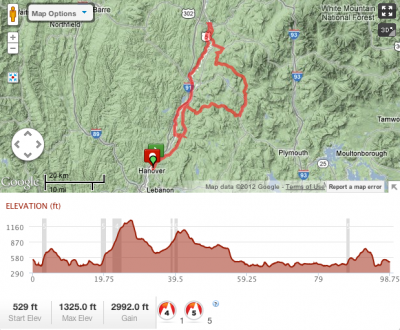 The terrain was very challenging for me in the beginning since there are 6 long stretches of category 4 and 5 hills in the first 45 miles.  The course has 3000 feet of elevation gains, many of which were extremely steep.  I got stronger as the day wore on while many of the field started to fade in the later miles.  I finished with a lot of gas left in the tank and I probably could have pushed another 20 miles or so.

I refilled my double water bottles and added nuun to them every 20 miles.  Normally I go through one 22 oz water bottle every 10 miles and this wasn’t very different.  One of our teammates had escalating knee issues that cause him a lot of pain.  Watching him climb the final hill towards the end was painful to see.  I think he was really brave and I am sure I would have pulled off for fear of injuring myself worse… but I am conservative like that and can’t afford to play the hero at my age.

When we got to the end there was a giant celebration and lots to eat and drink.  Unfortunately a thunderstorm rolled in and cut the party short.  The police forced a shutdown and dispersal due to the violent nature of the storm and the danger to a field full of people and bikes out in the open.

We are already talking about next year.  I think it is very possible that the Proud Prouty Peeps will live to ride again!